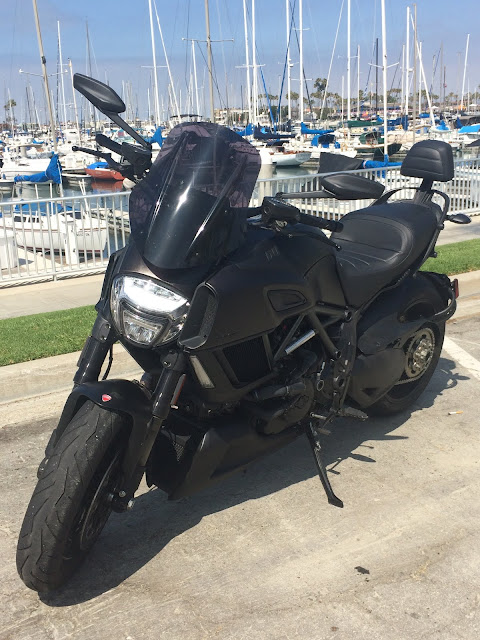 Because Independence Day is about freedom from tyranny, I decided that taking the She Devil out for a romp along the beach was about as free as I could feel. There is something about the motorcycle that engenders joy and a carefree attitude. So I went up Pacific Coast Highway, stopping only for fuel and breakfast at Schooner or Later (local marina breakfast spot in Belmont Shores).

I own motorcycle vests but they are were part of my undercover days, a long time ago now. Wearing them on a bike is -- in appropriate, and likely to get me pulled over by the Highway Patrol or shot by a rival "club". Thus, I am completely generic when riding.

People who ride Ducatis don't wear outlaw gear anyway. They wear those slightly gay racing leathers and pretend that they are part of a factory racing team. Which is why I ride the Diavel. All of the power and balance with none of the need to slide out and have my hide (or leathers) torn off by the cruel pavement.

Next stop, the Palos Verdes Peninsula (a fun place to take a scooter) as the road loops and jogs overlooking the ocean.

The weather could not have been better.

There was a biker rally in Washington DC not long ago. I took note that Blacklivesmatter and Muslim groups didn't counter protest the American rally. Riddle me that one. I would have attended if I lived on the East Coast. I do understand that a lot of those who ride to those events straddle Harley Davidsons. I've had Harley D's, and I'm still thinking on building a knucklehead from the ground up. But even my spaghetti cycle (Ducati) has more of an American heart than Barack does.

I saw four people in Huntington Beach (there was a PCH detour because of a parade) standing on a corner, protesting Independence Day and waving Mexican flags. Yes, I'd have gotten myself in trouble if I'd have ripped their arms off and beat them to death with them. So I moved on, but I thought of all those Bernie supporters, mutants and cretins who take but offer nothing to the country. They would tear down border walls and invite the unwashed and unshriven in and would have taxed me and people like me to pay them not to work.