A Gentle Rant: Part of why I ride a motorcycle is the pleasant roar of the motor. I've never ridden an electric motorcycle so I can't say whether the silence would be appealing or not, but I'm guessing no. 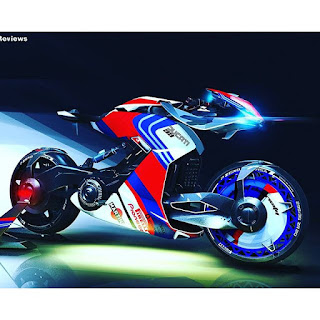 The Ducati Spirito concept is a sharp-looking design for a Ducati electric motorcycle. It’s pretty high tech, featuring a hub-center steering system, futuristic bodywork, a ridiculously narrow seat, a carbon fiber rear swingarm and of course a battery pack and electric motor in place of the usual Ducati V-twin engine.

The Ducati Spirito draws on Ducati’s past models and most recent sports bikes for design inspiration.

But how far can you ride on a battery charge? The answer to that question, based on my modest research is, 'not very far'. Maybe the goal is to save the environment in that 40 miles that you're riding between charges?

I get that the designers are drawing really attractive pictures and while I wouldn't say 'no' to a test ride on a prototype, I remain very skeptical, and hopeful that the jet bikes make their appearance soon.

And it the mean time, I'm more than happy to ride my Diavel and see the world go by at a blur.
Posted by LL at 3:53 PM 4 comments: 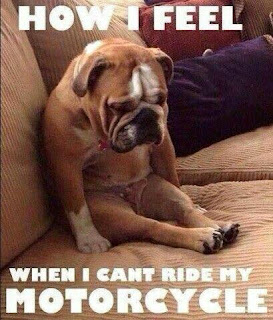 Log Item: I want to take the Ducati out today. What I really want to do is take it out now, but it's 7:00 am and all I would succeed in doing is freezing parts of me.

Gauntlet gloves keep my hands toasty warm and I have a jacket that deflects the wind nicely, but I don't like feeling all bundled up when I'm riding. It somehow defeats the concept of being "free" when you're on the motorcycle.

There are people who ride motorcycles to get from here to there and back but I'm not one of those riders. It's not simply transportation. It's an act of liberation when the motor roars and you are able to become one with the road (without laying on the road). 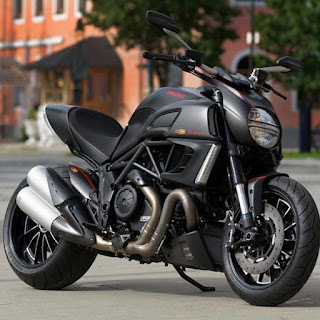 I haven't decided where I will ride today, and I may not decide "where" until I'm going "wherever".  That's one nice thing about riding outside of a group of motor heads.

I've tried the group thing and I may be a bit too much of an individual to ride in a herd. Does that make sense to you, dear readers? It may be that I'm becoming anti-social, but when I am driving on the highway and see a road branching off somewhere that looks interesting, I just take it to see where it goes. That's what I like best about off-road driving in my 4x4.  The same thing translates nicely to my street devil.
Posted by LL at 7:25 AM 8 comments:

Gripe Session: I never say never, but it will be a cold day in Hell that I buy another BMW product. Having said that, I'm interested in their ConnectedRide concept that adapts automotive innovations to the motorcycle world. To highlight the two-wheeled future, the company modified a K1600 GTL with a laser headlight and controls for a helmet-integrated head-up display. The result could make riding safer.

Some of BMW's latest models like the i8 and 7 series can already cut through the darkness with laser headlights, and this K1600 GTL brings that technology to motorcycles. The bright light can shine down the road up to 1,969 feet, which the company claims is about twice as far as a conventional unit. The additional visual range gives riders extra time to evaluate what's ahead at night and could make for a safer journey. The concept laser headlight on the bike is only a feasibility test for now, but preliminary development is underway. 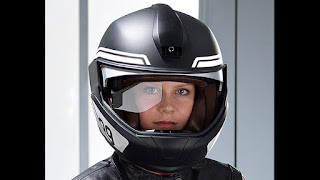 I haven't heard anything from Ducati on the subject. Ducati is owned by Audi (high tech German firm) and I'd expect to see something from them on the matter -- but no. I hate the idea of a kraut machine having an edge on my pizza bike.

A heads-up-display will not only make me feel more like I'm wearing a Top Owl fighter pilot helmet when I drive, but it's clearly safer. You no longer have to look at the instrument cluster and can keep your head in the game on the road. However, since they are not coming soon to Ducati, I'll begin to research how and if I can buy or build a HUD for my helmet and integrate it into Ducati's ride-by-wire computer. I really hate to experiment with the Ducati computer, and try to slave the output to Blue Tooth. It would be much better if they'd just FOLLOW the hated BMW, and get with the program.

Yes, the HUD/laser headlight is far more James Bond like than the traditional helmet/lighting arrangement on a motorcycle
Posted by LL at 10:19 AM 10 comments:

Log Item:  It's a brisk 68 degrees (20C) here in SoCal, (anything under 70 counts as "brisk") under cerulean skies.  I hadn't taken the Ducati out for a ride in 2016 yet, so today I did. I made a run through Carbon Canyon and then had Mexican food for lunch at El Farolito in Placentia (plug for El Farolito). 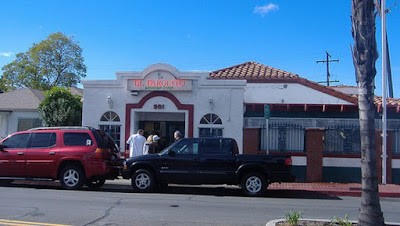 I met some people driving tractors (Harley Davidsons) who were waiting for a table, the same as I was. Some of their friends pulled up later and parked next to me. Fat boys with ape hangers. Not that there's anything wrong with that. Different people, different choices.

People drove a bit more rudely than usual, but since yesterday was New Year's Day, who knows. They may still have had a 3.0 blood alcohol level. It happens. If it was Scotland that would be the case for at least one more week. There were a lot of flat cats on the road, possibly a result of the New Year's Eve driving?

This is a boring blog post, but it's one of those days when (particularly after stuffing myself at El Farolito) about all that I could motivate myself to do was jump on the scooter and breathe the cold winter air.
Posted by LL at 3:12 PM 3 comments: