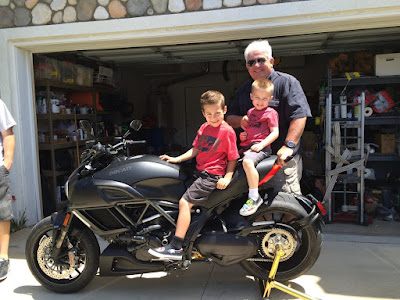 Log Item: I've had the she-devil for two years now, and I'm looking forward to the move to Arizona.  It's been something of a garage queen while worked to get the house ready to sell, with infrequent outings.

Even today, it's going to get a run for lunch, but just the daily tasks combined with the pressure from being self-employed means that I can't take the entire day and blow it on a ride along the beach. A few miles from her to a sandwich place and back is all the love that she will have showered on her.

The realtor, who rides a Harley Davidson Softail saw the Ducati in the garage when I showed him through the house and now he's actively shopping to trade off his hogs - and opting for the Diavel. It's a sexy bike, it's light, nimble and fast. 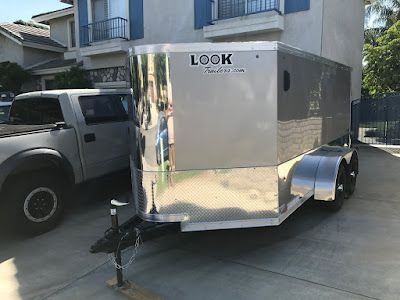 I purchased a motorcycle trailer to haul the bike(s) from place to place. It makes a more enjoyable ride to take the machines in a trailer for 500 miles, drop them off and ride them than it does to beat myself to death in the transit. Call me soft or old, I can take it.

The trailer (special order) has e-track tie downs, but to keep the bike upright and in good shape, I bought two Condor SC-2000 chocks (picture below). I installed two wicked large 3/16" steel backing plates underneath the deck. The trailer itself has a solid steel frame so engineering the backing plates took some effort.

Is the second SC-2000 a bit of over kill for a dirt bike? Maybe, but who is to say that I won't get another big street bike in the future? There remains that nagging desire to build a custom Harley D on a Pacau frame with an S&S knucklehead engine and a suicide shifter.